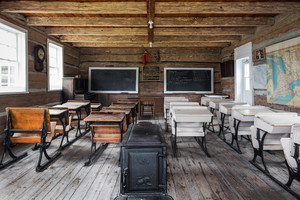 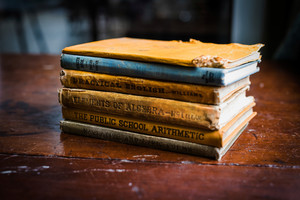 The education system became a formal organization in 1816. However, schools were not made a priority until 1841 and did not become free and mandatory until 1871. The school house here (SS No.15) was built in 1875 and operated in the Clay Bank area for nearly a century.

In the early 20th century, schools were often one room, with students of various ages and grades all being taught together. The only heat source would have been a wood-burning stove in the back of the room. It was the responsibility of the teacher and students to maintain the school, including getting wood for the stove and fetching drinking water.

In 1884, the Ontario Readers were commissioned by the minister of Education (George Ross) and instituted as the only acceptable reader in Ontario schools. Only three publishers (Copp Clark, W.J. Gage and The Canadian Publishing Company) were allowed to publish the reader, essentially giving them power over the whole market. Naturally, these companies conspired to keep the books at exorbitant prices, resulting in public outcry.

Sensing their contract would not be renewed, the company sought leverage and found it in the form of copyrights. See, the readers contained excerpts from famous literature that, as it turns out, Ross had forgotten to get the copyrights for, meaning every copy of the Ontario Reader was printed illegally. Behind the governments back, the publishers bought the copyrights and then presented Ross with an ultimatum: Ross could renew the contract for 10 years, or he could be sued, forced to print all new books, and be without any readers for as long as that took. Ross renewed the contract.

In 1907, an investigation into the textbook industry took place. Amazingly, the publishers admitted to blackmailing the government and conspiring to keep prices high. They also admitted to the low quality, with Gage saying they were books “no publisher would be proud of.”

After the trial, textbook prices were reduced from $1.35 to ¢0.49 /set. Hilariously, due to their poor quality, all the books needed to be reprinted, ultimately doing exactly what Ross wished to avoid.